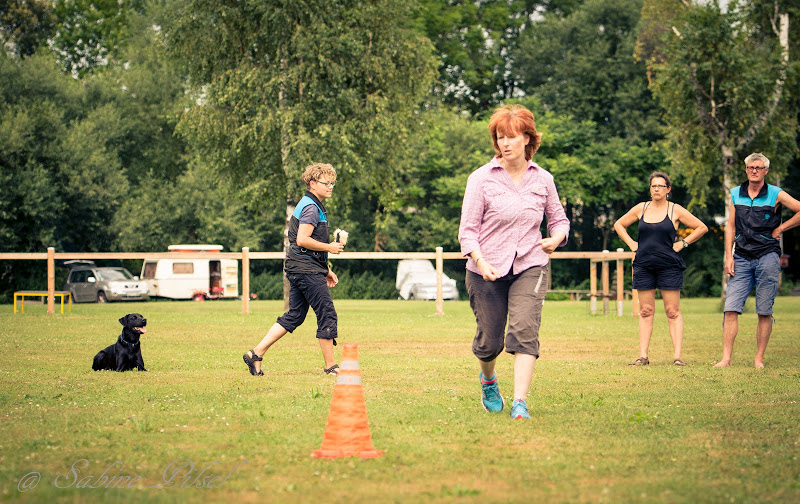 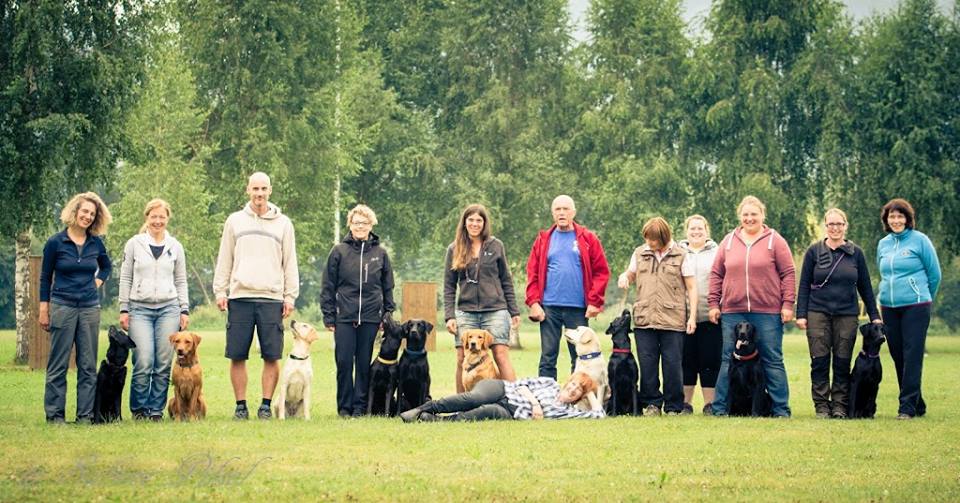 SEMINAR IN AUSTRIA  31 JULY-2 AUG for Retrievers in Obedience.

In the end of July I was invited to hold a seminar in Austria for Retrievers in Obedience. Beate Biesenbach had invited me a few years ago and now it was really happening after we had to cancel last year. I started the journey by going down to my parents in Småland to leave my dogs. Thank you for helping me out. I have the best of parents :-). Then I travelled to spend an evening with Susan Wastenson in Borås, much nearer the airport. As usual it was lovely to see her and her husband Micke. We had some Tacos and a very nice evening with a lot of talking. Next morning I had to start with a visit to a car-doctor. My car was behaving badly which was a bit scary. But Thanks to Getängs Bilservice I could continue to the airport. Sometimes you just get so happy when someone is nice to you and give you a bit of help without even charging you :-).

I met Beate for the first time when we were both competing in the World Championship in Paris. I think we both liked eachothers performances a lot and we liked to see eachothers dogs in action. Nash was very young at that time. He has after that been to some more WC and in Helsinki he and Beate got the special price: Judges choice. I can understand why because they are so nice to see in action both of them. They have something I really like to see – JOY and sparkling eyes between them!! 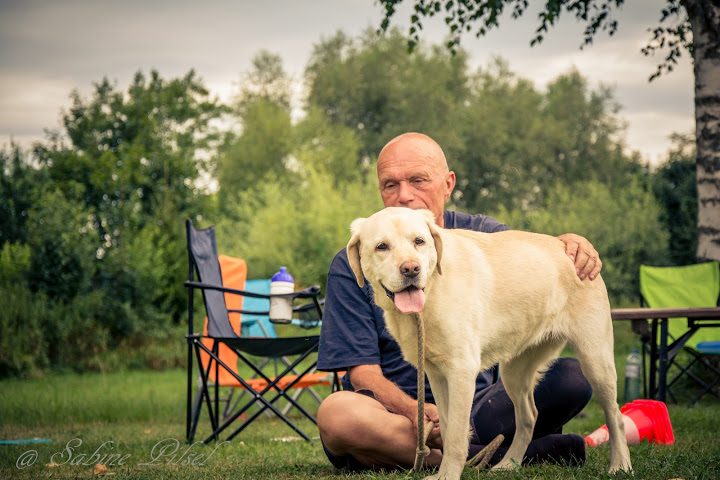 Another person I met for the first time in Paris was Erik Van Ingen Schenau. I think he´s burning for getting more retrievers into the obedience world 😉 .  At this time he had travelled for hours and hours to get to this seminar, ( I think he said 16!!)  even if he´s dog now is too old for competing and training he still wanted to come. I got really touched by seeing him making such an effort to come anyway. And with a lot of bottles of French wine for all of us too!! 🙂 . Thank you Erik!! Not just for the wine but for your engagement in the training and for coming and being so generous too. 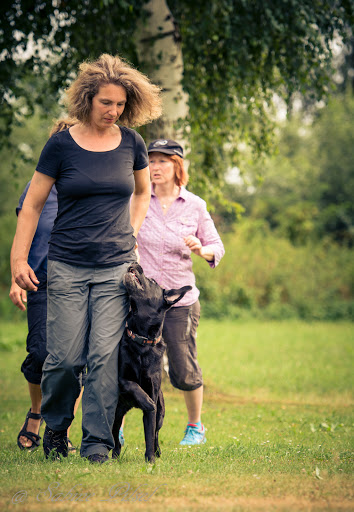 I met so many nice teams on this seminar. Here is Bettina Neuss with her 8 years old Akira. (Akira reminded me a bit of Abby, she was working with a lot of focus and sparkling eyes) They are competing a lot in England with the English kind of rules and classes. Quite different from the FCI obedience. One thing I liked was that they can always decide on a weekend if they are going to compete proparly or if they are chosing the competition to be a sort of “toy and treat-round”. That means if I understood it right that they can compete in one class and also train competition-like every weekend they are away. And if I understood right again they have two days of competitions usually.

It might be much easier to motivate the dog if you get so many times to get a competition-like environment. It sounds like the “toy-classes” they sometimes have here in Sweden in HTM and Freestyle-competitions. I really like this idea, I think it would be great for us in the FCI obedience too to have that. 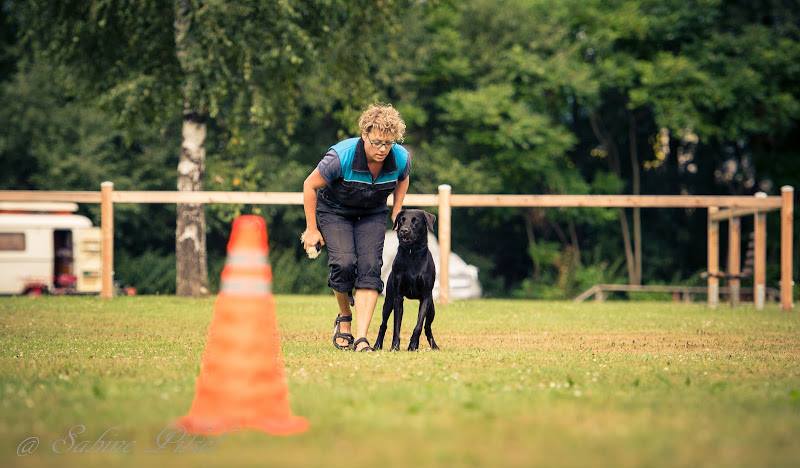 We spent some time talking about the new exercises and Beate with her younger dog Nike is training some of the parts for the new Go-round exercise. 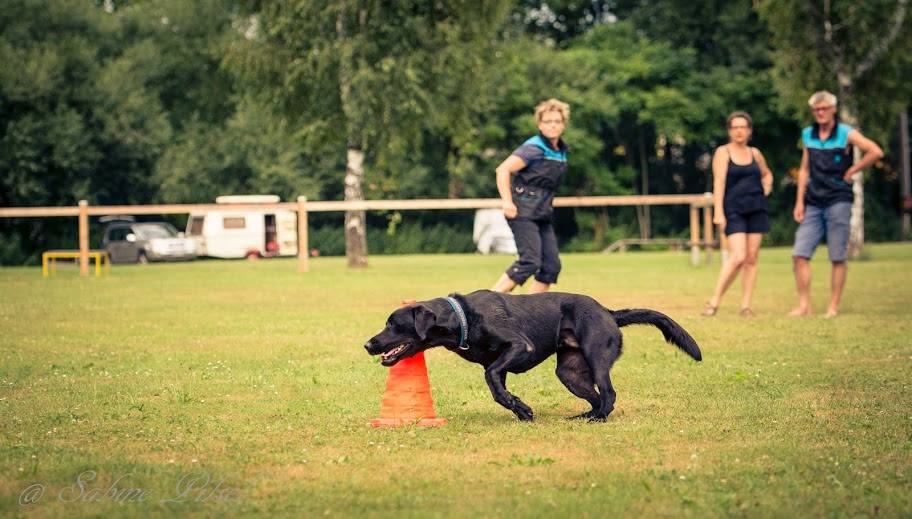 Ronya from Schwitzerland is longing for getting some training too. Such an energetic dog she is. One of the retrievers in the WC in Italy this Summer. From Schwitzerland with her owner Etienne Studer. A very lovely couple I think.

Karin and Cooper, keep on smiling! You look so nice together 🙂

If you didn´t know  – obedience-training is not a lazy man/woman sport!!  Expressions like “Move your ass!” was sometimes slipping out from my mouth, not to be rude to anyone, just as a reminder  that you as a good handler have to put energy into the training, you don´t always get energy from the dog for free. To be energetic and enthusiastic while rewarding the dog for can make such a big difference. We talked for example about what is happening if you are petting the dog during training and rewarding. Is it coming up close to you enjoying a cuddle or is it thinking that “Exercised finished” I go and sniff somewhere instead?   😉 .

I have got many more nice pictures from Sabine Pilsel who has promised me that I can use them on this blogg. Today I have chosen a few of them here on the page. Thank you Sabine. Nice to meet you!

In the evenings we had some wine outside the little club-house and then home to Beate for  a quick shower and after that we had lovely meals alltogether in a nice restaurant not so far away. Thank you everyone for being a joy to meet and spend some time with. 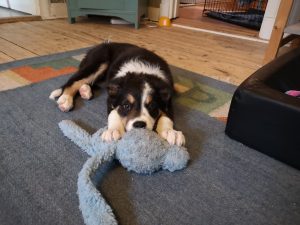 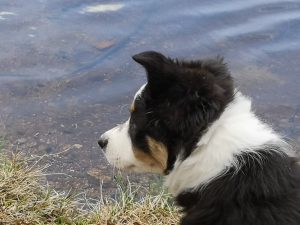